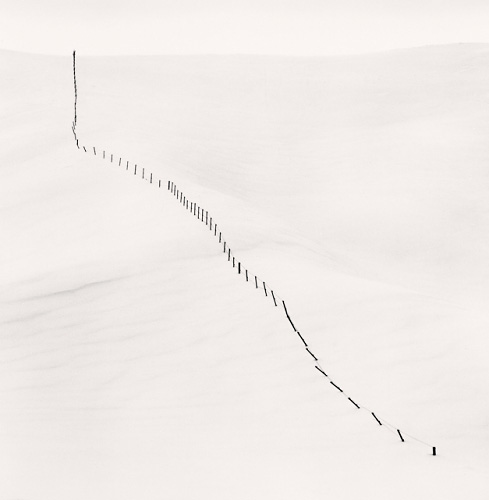 “… The job of photography is not to produce decoration for other peoples walls and homes. It’s a real voyage of discovery, and I think it’s an authentic way to go through life. It’s a way of discovering things, finding things, experiencing things …”

Just watched this beautiful film of Michael Kenna making photographs in Hokkaido, Japan. Landscape isn’t really my thing, but I love Kenna’s work. With the cold wintry weather upon us, and the January blues just around the corner, take a look at this film, then pull out the old camera and get into an early morning landscape for some photo therapy!

By Brian Dunne (on a Hassy!)

Twas the night before Christmas, when all through the house
Not a creature was stirring, not even a mouse.
The stockings were hung by the chimney with care,
In hopes that St Nicholas soon would be there.

The children were nestled all snug in their beds,
While visions of sugar-plums danced in their heads.
And mamma in her ‘kerchief, and I in my cap,
Had just settled our brains for a long winter’s nap.

When out on the lawn there arose such a clatter,
I sprang from the bed to see what was the matter.
Away to the window I flew like a flash,
Tore open the shutters and threw up the sash.

The moon on the breast of the new-fallen snow
Gave the lustre of mid-day to objects below.
When, what to my wondering eyes should appear,
But a miniature sleigh, and eight tinny reindeer.

With a little old driver, so lively and quick,
I knew in a moment it must be St Nick.
More rapid than eagles his coursers they came,
And he whistled, and shouted, and called them by name!

As dry leaves that before the wild hurricane fly,
When they meet with an obstacle, mount to the sky.
So up to the house-top the coursers they flew,
With the sleigh full of Toys, and St Nicholas too.

And then, in a twinkling, I heard on the roof
The prancing and pawing of each little hoof.
As I drew in my head, and was turning around,
Down the chimney St Nicholas came with a bound.

He was dressed all in fur, from his head to his foot,
And his clothes were all tarnished with ashes and soot.
A bundle of Toys he had flung on his back,
And he looked like a peddler, just opening his pack.

His eyes-how they twinkled! his dimples how merry!
His cheeks were like roses, his nose like a cherry!
His droll little mouth was drawn up like a bow,
And the beard of his chin was as white as the snow.

The stump of a pipe he held tight in his teeth,
And the smoke it encircled his head like a wreath.
He had a broad face and a little round belly,
That shook when he laughed, like a bowlful of jelly!

He was chubby and plump, a right jolly old elf,
And I laughed when I saw him, in spite of myself!
A wink of his eye and a twist of his head,
Soon gave me to know I had nothing to dread.

He spoke not a word, but went straight to his work,
And filled all the stockings, then turned with a jerk.
And laying his finger aside of his nose,
And giving a nod, up the chimney he rose!

He sprang to his sleigh, to his team gave a whistle,
And away they all flew like the down of a thistle.
But I heard him exclaim, ‘ere he drove out of sight,
“Happy Christmas to all, and to all a good-night!” 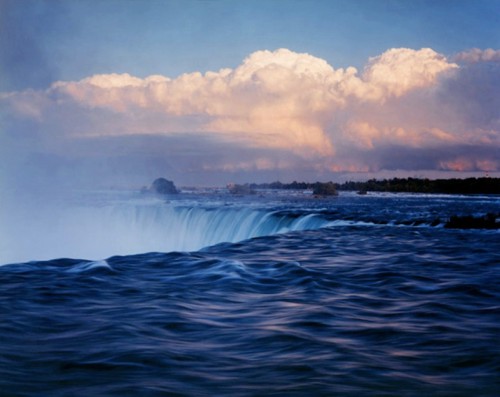 Magnum photographer Alec Soth is blogging again with Little Brown Mushroom. His top ten photobooks of 2009 are reviewed here. They are predictably eclectic! His old blog was excellent, and different. A pity he stopped writing it, finishing with this

I’m hitting the road and hanging up the blog. Join me for a non-virtual visit in Memphis (Oct. 5th) and Atlanta (Oct. 11th). Otherwise, send me a letter – I’m sick of email.

I’ll leave with a poem:

When I Heard the Learned Astronomer
by Walt Whitman

When I heard the learn’d astronomer,
When the proofs, the figures, were ranged in columns before me,
When I was shown the charts and diagrams, to add, divide,
and measure them,
When I sitting heard the astronomer where he lectured with
much applause in the lecture-room,
How soon unaccountable I became tired and sick,
Till rising and gliding out I wander’d off by myself,
In the mystical moist night-air, and from time to time,
Look’d up in perfect silence at the stars.

“Soth uses an 8*10 camera from the late 1980’s that makes almost painting like pictures. He follows the complicated process of using large-format camera and says he is lucky if he manages to make one or two exposures on a given day of shooting” (from Magnum Magnum). 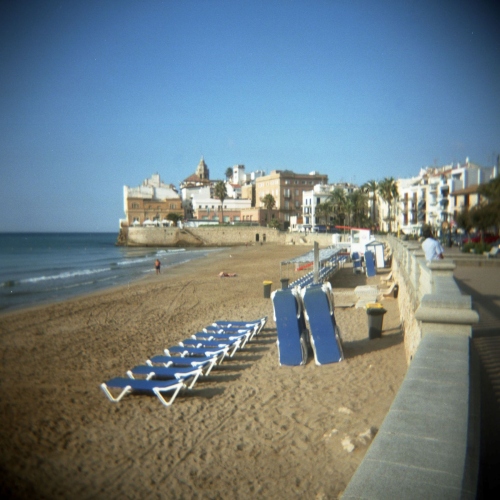 We’re into the long nights and short days of the winter solstice. Anybody working indoors at this time of year barely sees daylight at all. Come next Monday or Tuesday we will reach the depths, and after that the days will begin to stretch. So I here’s a picture from the summer 🙂 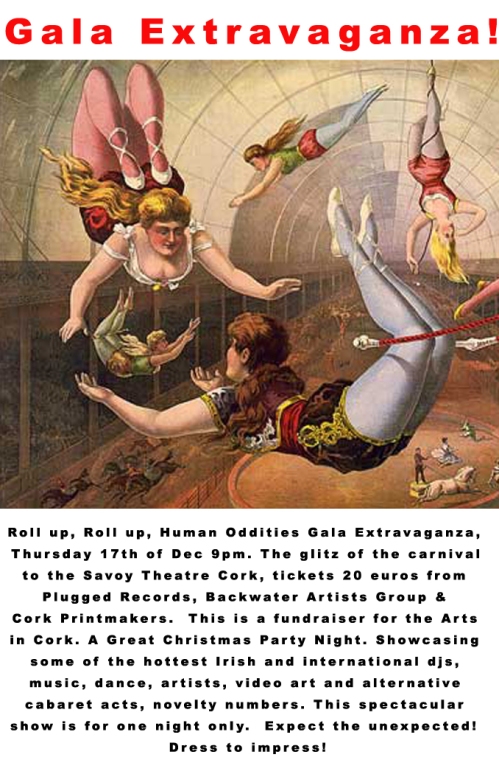 Thursday 17th of Dec 9pm. The glitz of the carnival comes to the Savoy Theatre Cork.
Tickets €20 (for each ticket sold by Cork Printmakers, €5 is put back into Cork Printmakers activities)

This is a fundraiser for the Arts in Cork. A Great Christmas Party Night. Showcasing some of the hottest Irish and
international djs, music, dance, artists, video art and alternative cabaret acts, novelty numbers. This spectacular
show is for one night only.

Expect the unexpected! Dress to impress! 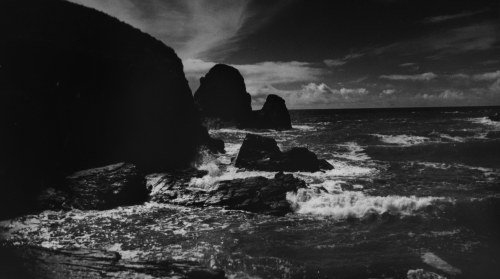 In addition to Miriam’s post a couple of days ago, the exhibition that we hung in Brew Cafe in Cork are still up, and would make lovely gifts! All the photographs are hand printed silver gelatin on fibre paper, framed and mounted. If you like one, it can be sold to you straight from the wall in time for Christmas. Why not drop in for a coffee and a look next time you are shopping in town?!

(Sorry for the shameless self promotion!) 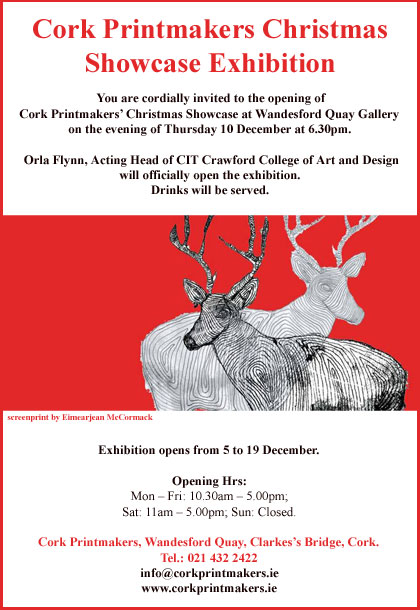 Brian Barry emailed me to let you know about the Cork Printmakers Christmas Showcase Exhibition which is runninng from the 5th to 19th of December, and is officially opening this coming Thursday, Dec 10th.

“… The exhibition will present some of the finest work from emerging and established contemporary artists in Ireland today, who work through the medium of printmaking. Artists on show will include, Lorraine Cooke, Morgan Doyle, Catherine Hehir, Jo Kelley, John Kelly, Eileen Kennedy, Donna McNamara, Frieda Meaney, Noelle Noonan, Michael O Donovan, Ben Reilly, Stephen Vaughan, and many more. The show is a perfect opportunity to find a unique and lasting gift for someone special this Christmas. For those who wish to initiate or expand their art collection Cork Printmakers Christmas Showcase offers an excellent resource for contemporary art collectors.  …”

If you know any photographers (which I presume you do if you’re reading this) then you’ll know they can be a bit particular about their gear. So if you’re thinking of buying them anything serious like cameras, lens or lights you’re better off just asking them exactly what they want or buying them a voucher for your local camera shop to avoid tears and tantrums on Christmas morning. So this guide is purely the fun stuff, stocking fillers at all different price ranges. I hope you find something in there that the photographer in your life might enjoy…or to put on your Santa Wishlist. Enjoy! 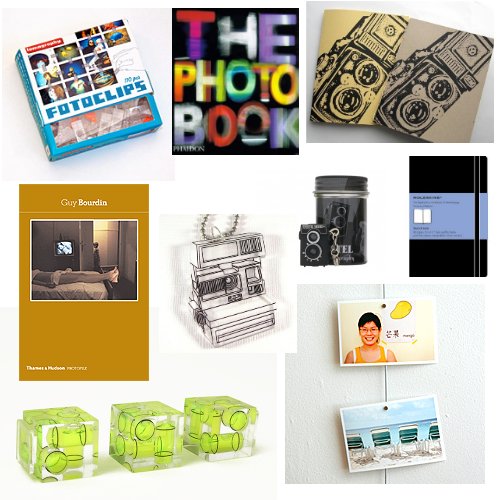 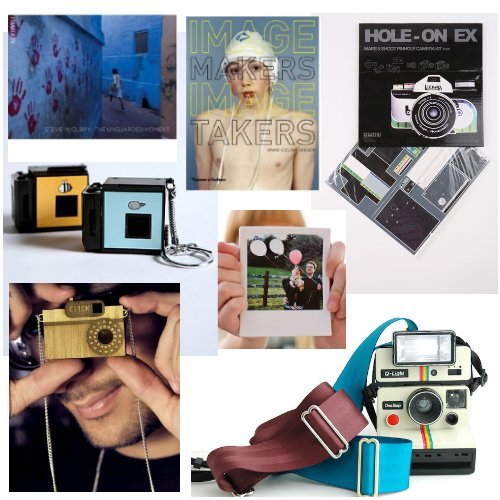 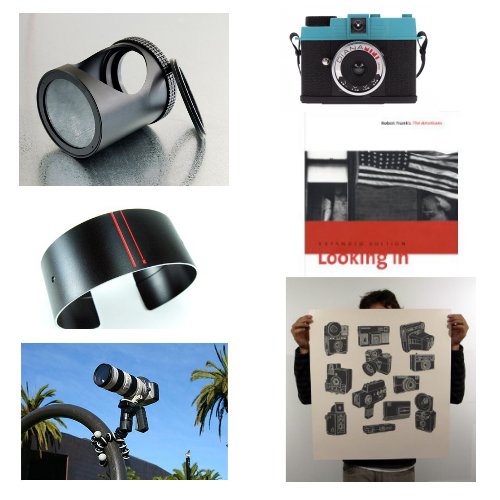 Clockwise from top left: The Super-Secret Spy Lens! – $50 to $55 from Photojojo,  Diana Mini – €50 from the Lomography Shop or from the Gallery of Photography in Dublin,  ‘Looking In: Robert Frank’s “The American’s”’ – €34.01 from the BookDepository.co.uk,  The Camera Poster #3  by Rod Post –  $30 from The Post Family Store,  The Gorillapod SLR Zoom – $50 from Photojojo, ‘Intrared’ Camera Lens Bracelet – $60 from ibwatson on Etsy 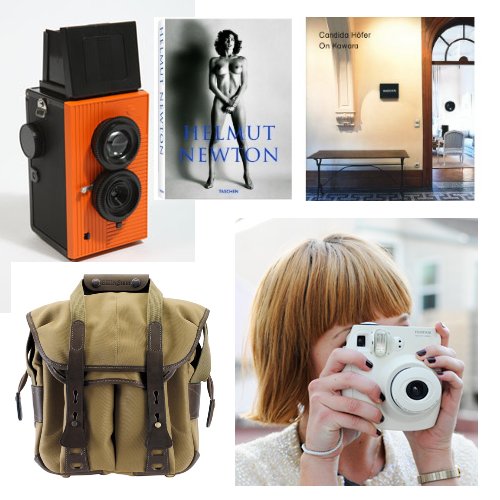 Clockwise from top left: Blackbird Camera – €124 – Urban Outfitters (Web Exclusive) or from the Gallery of Photography in Dublin, ‘Sumo’ by Helmut Newton – €65.48 from the BookDepository.com,  Candida Hofer ‘On Kawara’ – £51.55 from Amazon.co.uk,

If you still can’t find what you’re looking for check out PetaPixels blog post ‘21 Awesome T-Shirts for Photographers’ for some more ideas. Happy shopping!